How Redocly’s no-compromise focus on developer freedom won the trust of an API-first Y Combinator graduate. 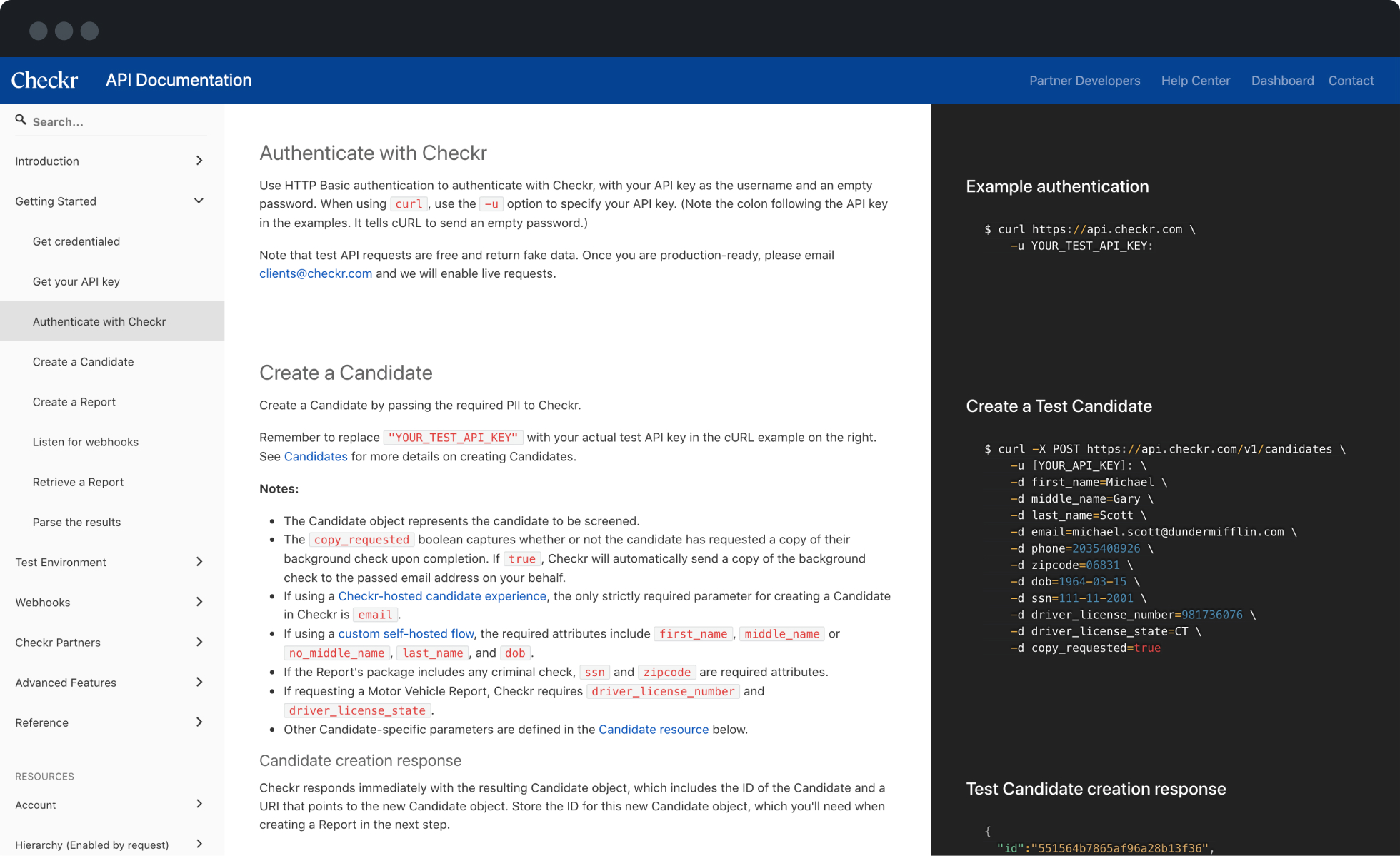 If someone knows a thing or two about API documentation, that’s Beth Wright, content strategist & senior technical writer at Checkr, the leading technology company in the background check industry. She had led documentation efforts for leaders like CoreOS and used dozens of tools. But when it came to revamping Checkr’s API docs, a newly discovered one really stuck...

“Redocly is the first developer documentation tool that’s excited me.”

This is our story together.

AI-powered background checks at scale. Hell-bent on making hiring better, fairer, and more efficient for everyone. 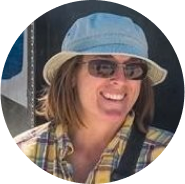 Checkr graduated from Y-Combinator in 2014, and it has since then superpowered the on-demand economy with background checks at scale. Used by Uber, Instacart, Handy, Zenefits and thousands of others, Checkr has an API-first business model that relies on an amazing developer experience, both internal and external. In 2018, Checkr’s in-house docs tooling had become inefficient and unwieldy to manage, requiring hours to update and fix bugs. That’s when Beth decided DIY school was out.

“own your files, and mandate the content included on the site, both of which are deal breakers for me.”

Fortunately, a Google search brought her to Redocly, which checked all the boxes and then some, offering the perfect mix of freedom and hands-off standardization:

Oh, and if you’ll excuse the bragging rights, Beth was completely sold when she found out that Docker and NASA were using Redocly. We actually run in space. Go figure!

How Checkr is using Redocly

No external CMS or 3rd party lock-in gives Checkr complete ownership of their content and pipeline.

Your Git. Your docs. Your choice.

Ease of onboarding was a particularly strong plus for Beth and her army of developers. As soon as the team realized they could do everything docs-related from a single Git repo, without extra hoops or integration rigmarole, they were all-in.

“Because I had used Git before, and because Redocly ported our existing documentation over to their OpenAPI spec, onboarding was super easy.”

In a way, this approach offers the same freedom as the “DIY school,” but without the need to maintain your own tools, all while publishing styled documentation with a single solution that “just works.” The term win-win comes to mind...

“The insanely quick response time of the Redocly team to any and all requests for help clinched the deal.”

Checkr also runs a dedicated documentation flow for their many partner developers. For consistency and ease of use, Checkr uses a separate instance of Redocly’s Reference Docs to host guides that help developers at partner organizations integrate Checkr with their platforms, which are then offered to their customers. This project seamlessly references Check’s primary API docs set, while being more specific in scope and strategic function. 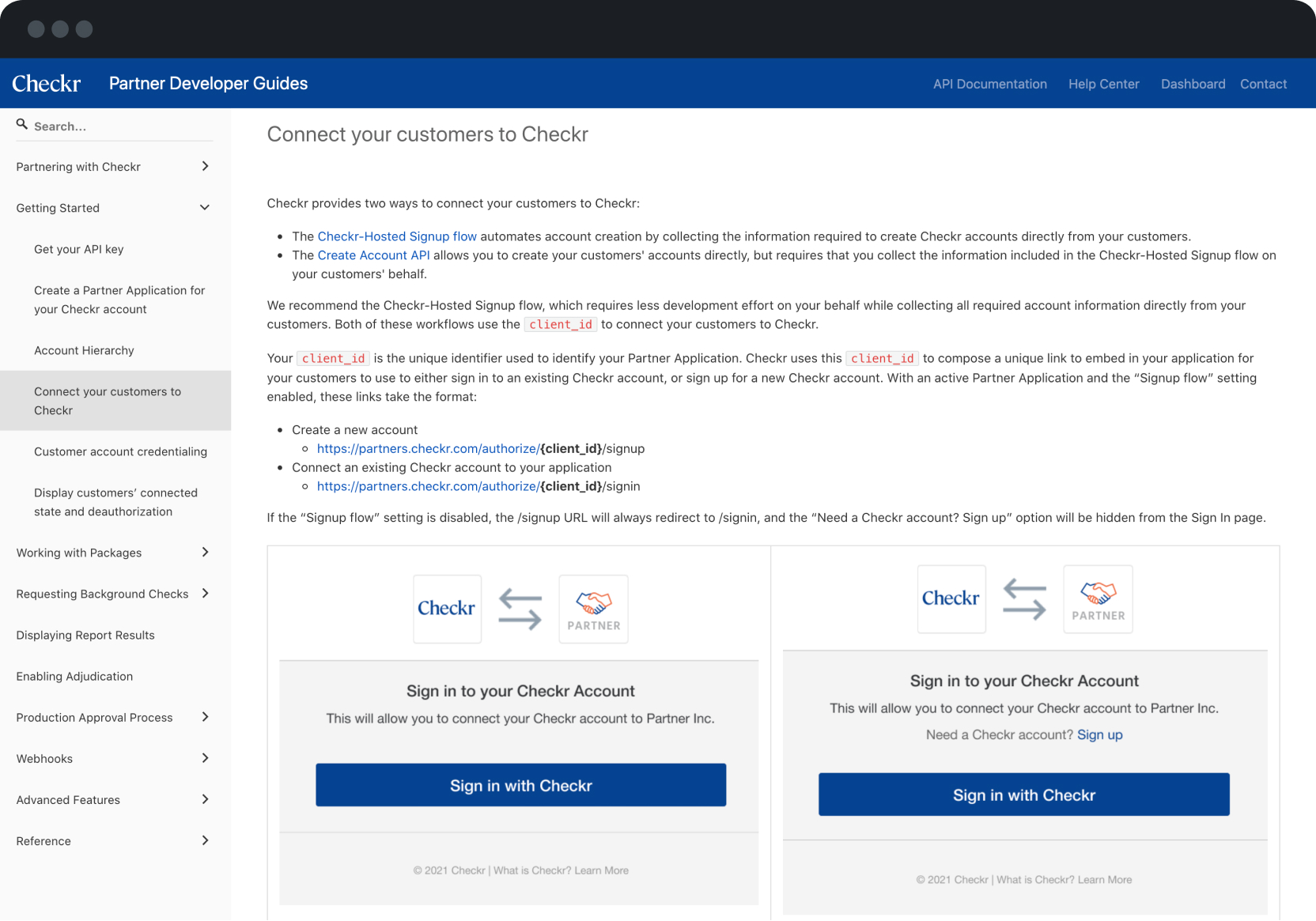 Empires can be toppled in a day, and a lot can change in three years. Especially in the tech industry. And yet, the Checkr ← 💖 → Redocly partnership is still going strong. As Checkr keeps innovating background checks, we’ll also innovate API documentation for this new economy. In fact, Beth herself gave us some invaluable feedback for our next steps, such as going heavy on user analytics, search query stats, and many other little bits that make a fantastic developer experience.

Superpower your API lifecycle with Redocly